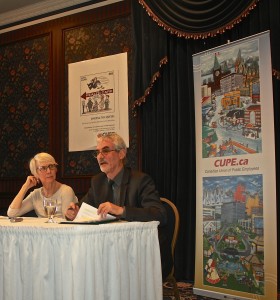 A legal opinion commissioned by CUPE Saskatchewan shows that Bill 179, the Private MRI Facilities Licensing Act, is in violation of the Canada Health Act.

Bill 179 permits private MRI clinics to charge patients out-of-pocket user fees for MRI services, which will allow patients to jump the queue for diagnosis and treatment. In 2008, Premier Brad Wall told reporters that offering MRI services for a fee “seems to be outside the Canada Health Act” and was an area where the government did not want to tread.

“By creating two-tiered medical care, Bill 179 offends the criteria established by the Canada Health Act,” said Steven Shrybman, a lawyer with Goldblatt Partners LLP. “While privately funded MRIs are permitted in some provinces, in our opinion, the practice is unlawful under the Canada Health Act and fundamentally at odds with the most essential feature of Medicare, which is care according to need, not one’s ability to pay.”

Doctor Sally Mahood, a Regina family doctor and an associate professor, Family Medicine, University of Saskatchewan, has additional concerns about the rationale for this legislation.

“There is very clear evidence that, far from relieving pressures in the public system, offering a separate stream for the wealthy to jump the queue actually lengthens public waitlists. Medical tests should be ordered in accordance with evidence-based guidelines about their usefulness and indications.”

According to the Canadian Institute for Health Information, Saskatchewan posted typical waiting times for MRIs at 28 days. Conversely, in Alberta, even with pay-for-service private clinics, typical wait times for an MRI scan was 80 days.

“CUPE opposes Bill 179 which, if implemented, will lead to the erosion of our public health care system that Saskatchewan people hold dear,” said Tom Graham, president of CUPE Saskatchewan. “Bill 179 is a misguided response to a complex situation. CUPE urges the government to abandon Bill 179 and the option of private user-pay MRI clinics and to ensure that medical access is based on need not ability to pay.”