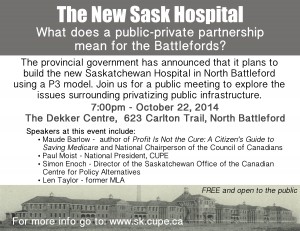 The provincial government has announced that it plans to build the new Saskatchewan Hospital in North Battleford using a Public-Private Partnership (P3) model.

Join CUPE and the Council of Canadians for a public town hall meeting to explore the issues surrounding privatizing public infrastructure and what a P3 means for the Battlefords.