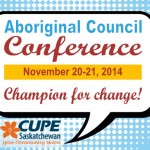 Open to all CUPE members, the CUPE Saskatchewan Aboriginal Council Conference  – Champion for change – seeks to build union activism with a focus on equality and rights for Aboriginal people in our workplaces and communities.

Join us and be an ally for change!