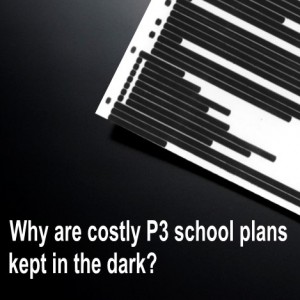 Despite providing assurances that the process surrounding its push to privatize the building of new schools through public-private partnerships (P3s) would be transparent, the response to an Access to Information Request demonstrates the Provincial Government is going to great lengths to shroud its P3 plans in secrecy.

“While quick to repeat the sales pitch, the government is slow to release any details about their costly P3 privatization plans and appear to go out of their way to keep information from the public,” says Tom Graham, President of the Canadian Union of Public Employees (CUPE) – Saskatchewan.  “Released documents are heavily redacted and the secrecy even extends to the full details about already publicly known information which the government has also chosen to black out.  It leaves one to wonder why the government is going to such great lengths to keep information from the public.”

CUPE filed its Access to Information Request on March 6, 2014 with SaskBuilds – the provincial Crown Corporation established to promote and oversee large-scale P3 privatization infrastructure projects in Saskatchewan.  In the 21 pages of documents released on April 4, 2014 in response to CUPE’s request, SaskBuilds redacted large sections claiming broad exemptions under the Access to Information law but failed to identify the exemption for each redaction as required by the legislation.  Yet, some of the same redacted sections include obvious references to information already posted on government websites, published in other government documents, or reported in the news.  CUPE also notes that the redacted information in the documents released largely consists of what appears to be general research, information about the overall framework for P3 contract negotiations contained in briefing notes, and details related to a Request for Proposals already awarded and, accordingly, seem to stretch exemptions from public disclosure under the law well beyond their acceptable scope.

“The government should live up to its commitment to be transparent and release the information they are withholding from the public about their P3 privatization plans that Saskatchewan people will be on the hook to pay for,” says Tom Graham.

Briefing notes obtained by CUPE revealed that the Ministry of Education previously determined: “P3s are an expensive public procurement approach because they involve higher interest rates, a more expensive bidding process, third party advisors and a profit margin”.  Since determining that P3s are too expensive, CUPE’s Access to Information request reveals that no further briefing notes were prepared by the Ministry of Education after September 2010.  Ignoring this advice, SaskBuilds is pursuing P3 schools and has shown to be less than transparent about important details of the P3 schools project expected to cost Saskatchewan well over $100 million.

CUPE will file a Request for Review with the Saskatchewan Information and Privacy Commissioner challenging the exemptions from full disclosure claimed by SaskBuilds.
View: