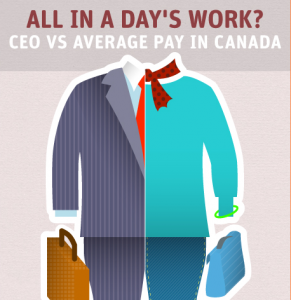 By 1:11 p.m. on the first official work day of the year (January 2), Canada’s top 100 CEOs will already have pocketed what it takes most Canadians working full time an entire year to earn.  According to the annual review by the Canadian Centre for Policy Alternatives (CCPA), Canada’s highest paid CEOs make 171 times the average Canadian worker.  PotashCorp of Saskatchewan CEO William Doyle is listed as the eighteenth highest paid among the top 100 highest paid Canadian CEOs in the report.

It’s a stark pay gap that keeps rising.  Between 1998 and 2012, CEO pay ballooned by 73 per cent (from 150 to 171 times more than the average wage) while, in the same period, the average Canadian full-time worker’s annual salary only grew by six per cent.  Not since 1920 have Canada’s elites pocketed a larger share of the income gains and, at the same time, marginal tax rates for millionaires are at their lowest rates last seen in 1920.

The growing pay gap between Canada’s rich and everybody else reminds us that trickle down economics – unnecessary tax cuts for already profitable corporations and the wealthy combined with reduced public services – are making inequality worse and the rich even richer.  Alternatively, unions and investments in public services build a stronger middle class and benefit everyone.