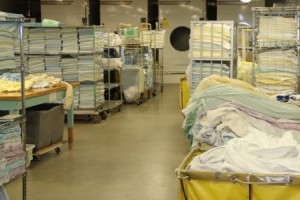 The privatization of health care laundry will result in the loss of approximately 400 jobs and the permanent closure of public facilities in Prince Albert, Weyburn, Yorkton, Moose Jaw, Regina and Saskatoon.

REGINA – A newly inked decade long health care laundry privatization contract with for-profit, Alberta-based corporation K-Bro Inc. means Saskatchewan will lose jobs and taxpayer funds will be diverted to corporate profits, says the union representing over 300 laundry workers in the public non-profit laundry facilities slated for closure across the province due to the privatization deal. The full cost of the contract between K-Bro Inc. and 3s Health – the agency set up to implement privatization of health care services – is not being disclosed.

“It’s shameful that the government is privatizing health care laundry with a ten year secret privatization contract that puts nearly 400 people out of work, funnels tax dollars to corporate profits and negatively impacts local communities – especially Prince Albert where 100 workers alone will lose their jobs,” says Tom Graham, President of the Canadian Union of Public Employees (CUPE) – Saskatchewan. “The government is favouring shareholders of an out-of-province corporation rather than standing up for its shareholders – the people of Saskatchewan.”

K-Bro is the largest private health care laundry processor in Canada with the majority of revenues made from privatization contracts in other provinces. Last year, K-Bro reported total revenues in excess of $126 million and CEO compensation of over $1.2 million in 2011. According to its annual reports, K-Bro recruits temporary foreign labour to keep wages low.

“While the government eliminates nearly 400 jobs through health care laundry privatization, there is little doubt that the relatively few jobs left under K-Bro will have lower pay despite the hollow statements from the government agency 3s Health,” says Graham. “Between the reported use of temporary foreign workers and its published statement that the corporation ‘will continue to oppose any unionization’, it’s clear that all signs point to low wages and a hostile corporate attitude toward the rights of workers.”

CUPE also raises concern over the growing secrecy surrounding health care privatization. When the first laundry privatization contract between K-Bro and the Saskatoon Health Region was entered into in 2012, CUPE’s Access to Information Request for a copy of the contract was denied despite K-Bro reporting the contract was worth an estimated $1.3 million of taxpayer-funded revenue. The latest contract, privatizing all of Saskatchewan’s health care laundry, is again being kept secret. Furthermore, there is no confidence that details will be released as the government-funded agency, 3s Health, has been able to skirt Freedom of Information laws due to its designation as a non-profit organization since its formation in 2012.

“The pattern of secrecy surrounding the privatization of Saskatchewan’s health care system has to end,” says CUPE Health Care Council President Gordon Campbell. “The government should come clean with the full cost of the contract and commit to being transparent by amending Freedom of Information laws to include 3s Health.”

As a result of the wholesale privatization of health care laundry in Saskatchewan, public laundry facilities are slated to close over the next two years in the communities of Prince Albert, Weyburn, Yorkton, Moose Jaw, Regina and Saskatoon.