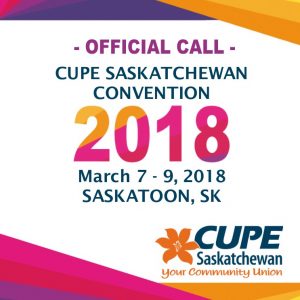 The CUPE Saskatchewan Annual Convention 2018 will be held on March 7 to 9, 2018, at the Radisson Hotel in Saskatoon, SK.

Each year, delegates from affiliated CUPE locals across the province gather at the CUPE Saskatchewan Convention to set the direction and determine priorities for the year ahead, elect members to leadership positions, hear reports about the work being done by our union, and engage in discussions about issues facing CUPE members and the public services we provide.

Book your accommodations for Convention 2018 at the Radisson Hotel Saskatoon using the following CUPE link: