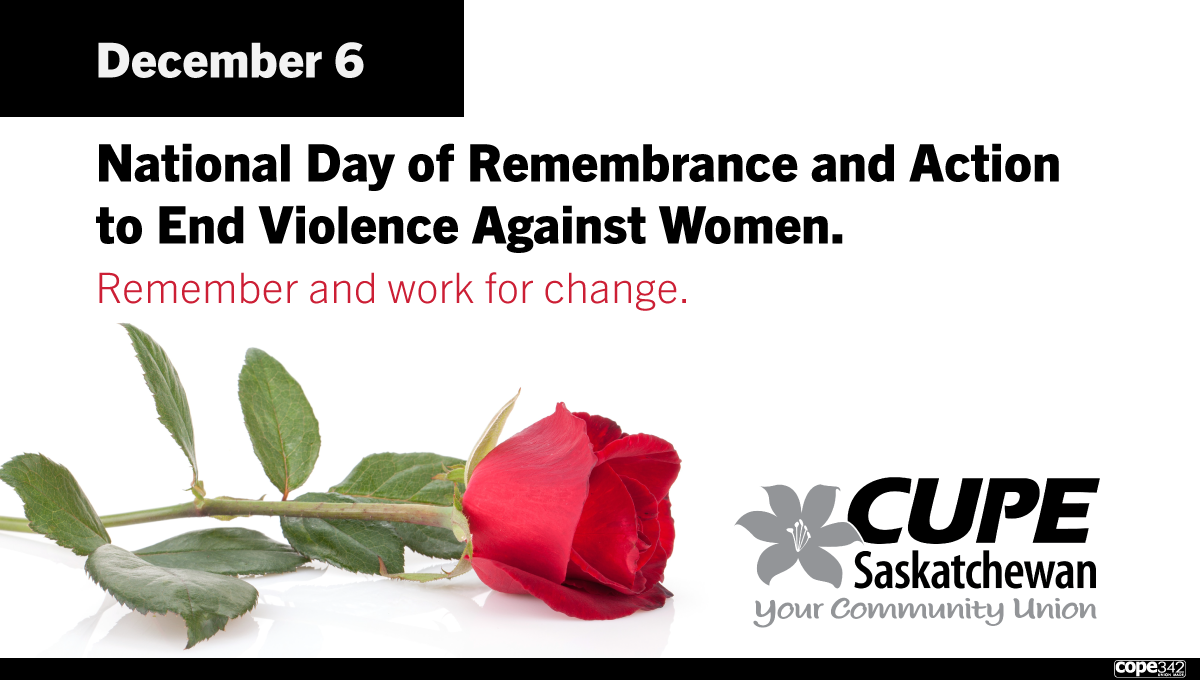 December 6 is the 33rd anniversary of the 1989 École Polytechnique massacre in Montreal where 14 women were singled out and murdered because of their gender. Among the 14 women who lost their lives in the tragedy was Maryse Laganière, a CUPE member who worked at the school.

Today, on the National Day of Remembrance and Action to End Violence Against Women, we honour and remember all those who have lost their lives because of gender-based violence and commit to taking concrete action to end all forms of gender-based violence. Canada’s unions have marked the National Day of Remembrance and Action since the beginning and this year are united in saying #NeverAgain: End Gender-Based Violence at Work now.

The recent national survey by the Canadian Labour Congress (CLC), Harassment and Violence in Canadian Workplaces: It’s [Not] Part of the Job (April 2022), has exposed the unnerving reality that gender-based harassment and violence remain a persistent threat to workers – and that more must be done to stop it and prevent it. The survey also found that third-party violence (from customers, clients, patients and others) accounts for 1 in 3 of these incidents and is a particular threat to women and gender-diverse workers who are more frequently employed in public-facing jobs. The survey also found major barriers to reporting and the urgent need for a comprehensive approach to prevention that includes a gender-responsive and intersectional approach.

In 2021, 173 women and girls were murdered in Canada. That represents a 26% jump from 2019. More than half of the victims were Indigenous, Black and/or racialized. (Source: Canadian Femicide Observatory for Justice and Accountability).

Read more about third-party violence at work and its impacts on women, two-spirit, trans, non-binary and gender non-conforming workers in this statement by labour leaders. Canada’s unions are calling on the federal government to host a summit bringing other levels of governments, employers and unions together to examine third-party violence as a persistent and escalating phenomenon.