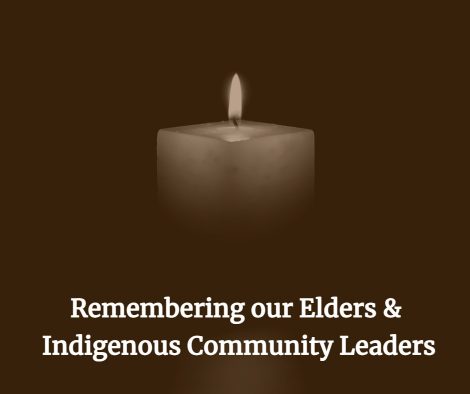 CUPE Saskatchewan extends its condolences to the families and communities mourning the loss of Indigenous community leaders and Elders.

The following is a statement by CUPE Saskatchewan’s Indigenous Council.

As the new reality of the world has settled in, and we all have tried our best to come to terms with the challenges we all face, one of the most important things from which we all can gather strength is the teachings and leadership of our Elders and leaders.

Tragically, the past few months have been marked with the incredible loss of so many of our leaders and Elders in a very short amount of time. Sadly, due to the current COVID-19 pandemic, we as Indigenous people have had to try our very best to adapt and provide the very important spiritual, cultural and traditional ceremonies we have when it comes to the loss of loved ones. While we have been able to provide some of the traditional teachings and protocols to the families, there are many which can never be properly replicated via technology, such as a comforting hug, the holding of one’s hand, shoulders to cry on, and the most important one, the shared, in-person acknowledgement and mourning of a community’s loss.

The past few months have not allowed us to come together to mourn the loss of Chief Fred Sasakamoose, of the Atahkakoop Cree Nation, who was taken from us in November 2020 by COVID-19 at the age of 86. Fred was one of the first Indigenous players in the NHL, and was the first Indigenous player with Treaty Status to play in the NHL. He went on to serve his community as Chief, and as a role model for countless Indigenous hockey players across the country.

Grand Chief Ron Michel served over 20 years as Chief of the Peter Ballantyne Cree Nation, and a further 12 years as Grand Chief of the PAGC, which represents 12 First Nations across northern Saskatchewan and more than 30000 people. He was a powerful and respected leader, and he devoted his life to the betterment of the people of the north. His death on January 25, at the age of 69 is a painful loss for us all.

Captain Randy Bair served with the Muskoday First Nation Volunteer Fire Department for over 25 years, and his work in the Fire and Rescue Service extended over 40 years, until his death from cancer on January 29 at the age of 61. He also was an integral member of both the Prince Albert Grand Council Search and Rescue organization and Saskatchewan First Nation Emergency Management. His training, expertise and passion for his calling will be remembered by his friends and colleagues forever.

Philip Favel was one of the few remaining Indigenous veterans of the Second World War. A Nehiyawak member of the Sweetgrass First Nation, he saw action on Juno Beach, and across France, Belgium, Holland and Germany. He was a staunch advocate for the rights of First Nations veterans, and in 2000, he returned to the Netherlands for the 75th anniversary of the Liberation. He was awarded the French Legion of Honour, and last year, his portrait was unveiled at the Canadian War Museum. His death on the 31 of January 2021 brought to an end 98 years of a life spent teaching, sharing his experiences, and continuing to be a warrior for the rights of Indigenous people.
On behalf of the CUPE Saskatchewan Indigenous Council, I wish to extend our deepest sympathies to the families of those we have lost.

The examples they set for us all will continue to live on in the work we do. They are now among the Ancestors.