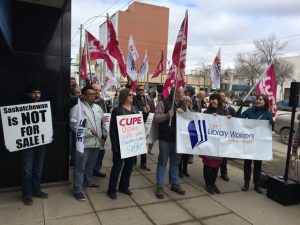 YORKTON: The Parkland Regional Library is reducing services and laying off eight people to deal with the 58 per cent budget reduction from the provincial budget. Seven CUPE members are among the workers facing a layoff.

“The Sask Party has put our regional libraries in an impossible situation. Facing a 58 per cent deficit with no warning means our communities lose out on the important programs and services our libraries provide,” said Alex Lenko, CUPE national staff representative. “Our members who work in the library system love their jobs and are proud of the important work they do to provide an amazing service to the people of Saskatchewan. CUPE will fight these cuts and stand up for our members’ jobs.”

While the library is not looking at closing branching or reducing hours, the funding shortfall means fewer new books and less e-resources, an end to holds from other libraries, and an end to the ability to pick up books at one branch and drop them off at a different branch. These changes come on top of the news that the world recognized provincial inter-library loan system is being shut down.

“These funding cuts will have a colossal impact on the wonderful services and programs our libraries provide,” said Tom Graham, president of CUPE Saskatchewan. “These cuts come in a budget that also cut funding to K-12 education, STC, universities, regional parks, municipalities, and health services. It is important that everyone who is concerned about these cuts contact their MLA and let them know they are concerned.”

CUPE represents over 700 library workers across the province.