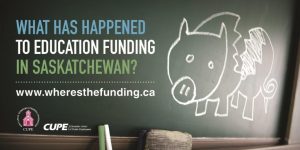 REGINA: The provincial cuts to K-12 education are larger than expected, and CUPE education workers are worried about how the cuts will impact children in Saskatchewan.

The 2017-2018 Saskatchewan budget, released on March 22, cut operating funding to school divisions by 2.6 per cent on a school year basis. Twenty-seven out of 28 school divisions are facing cuts between 2.6 and 8 per cent. The total funding reduction for the K-12 sector is $54.2 million, which assumes a 3.5 per cent roll back of wages across the board. Wages are still subject to collective agreements, and any changes must be negotiated at the bargaining table.

“Budget cuts have real consequences for children. Our K-12 education system has already faced years of inadequate funding. Programs have been cut, schools are falling into disrepair, and some divisions have already had to lay off staff. And instead of properly investing in our children and their education, the provincial government has chosen to cut funding,” said Jackie Christianson, chair of the CUPE Saskatchewan Education Workers’ Steering Committee. “The largest cuts in the education budget are to frontline staff such as teachers and support workers! The ripple effect of this devastating budget will hurt many.”

Education support workers are already among the lower paid public servants, working for only ten months a year with limited hours.

Many school boards are dealing with increased enrolment and more complex student needs, including an influx of new immigrant students who have English as an additional language need. Vulnerable students need an increased number of dedicated educational assistants, not fewer, to successfully integrate into the school system.

“There is simply no way you can slash the number of staff dealing with special needs students, slash the numbers of workers keeping our schools clean and safe and running smoothly, and expect the same quality of education for our kids,” said Christianson. “Our children, especially children with diverse needs, have the right to a quality education. The government is taking that away from them with this budget.”

CUPE is also concerned about the proposed changes to The Education Act proposed in the budget, which grant unprecedented power to the Ministry of Education. The act grants the government additional powers and authority to issue directives to boards and the expenditure of capital and operating funding provided by government. Such directives concerning sector efficiencies will have an impact on school division operational funding and, in turn, their 2017-2018 budget. In addition, it is concerning that school divisions are no longer able to make democratic decisions on how to use their funding reserves.

“The government said they listened to the public and kept the elected school board trustees, but everyone should read the fine print to the amendment of The Education Act. It is troubling that the government is moving towards absolute power over schools, staff, and students’ learning,” added Christianson.

“If you care about our children’s rights to a quality education, I urge you to stand up, take action, and stop Brad Wall from gutting our education system. Our children are not Toyota car parts on an assembly; keep LEAN out of our schools.”

CUPE is urging its members and concerned citizens to contact their MLAs and demand they take a stand against this budget. You can learn more at www.wheresthefunding.ca.