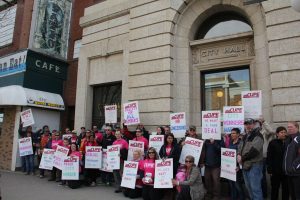 Moose Jaw — The City of Moose Jaw has filed an application with the Labour Relations Board to remove 18 members of Local 9 from the bargaining unit. It is one of the first employers in the province to aggressively seek to use new provisions under The Saskatchewan Employee Act (SEA), which came into effect earlier this year and allows employers to try to remove workers with supervisory duties from the bargaining unit.

“Their announcement is creating a lot of stress and uncertainty for our members,” said Stacey Landin, president of the local. “People are worried about job security, about their benefits and wages, and what the future holds.”

The impacted positions range from accountants to recreation staff to water and waste water staff. This move by the city comes in the middle of a very tense round of conciliation. The local has a strong strike mandate from its membership, and the city is seeking serious concessions.

“Attempting to strip 18 members of their right to belong to the union of their choosing in the middle of the conciliation process is not a recipe for healthy labour relations,” Landin said. “We are doing our best to come to a fair and reasonable deal, and the city keeps treating us with a lack of respect.”

Local 9 believes that removing supervisors from the bargaining unit is completely unnecessary. Many major employers in the province have already signed irrevocable agreements to keep the status quo arrangement, including the Ministry of Health, SAHO, and the Government of Saskatchewan.

In the coming weeks, CUPE will challenge the employer’s application to the Labour Relations Board, arguing amongst other things that removing employees from the bargaining unit of their choosing is unconstitutional. CUPE will also explore organizing another bargaining unit. Both processes will create more administrative work for city administration and add significant costs to the city’s budget.